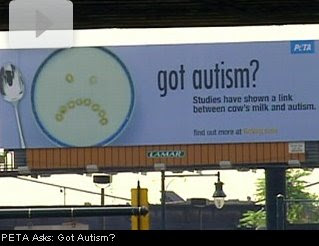 That was a billboard of PETA in Newark, New Jersey, USA that claims that autism may be linked to drinking cows milk. Autism groups, parents with child with autism, researchers and doctors got a right to be angry by this yet another stupid stunt of the animal rightist group. I am fumed by it really. (More about this news and other autism news here.)

This just demonstrate how many people pretend to know about autism and cares for people with autism and empathize with their parents.

Also demonstrates how PETA people, their campaign managers and advocates don’t really think much and verify their facts first before doing a stunt campaign to get noticed.

First things first, milk does not cause autism. In fact experts studying the cause of autism are still facing a blank wall. All claims and findings linking to autism are still tip of the iceberg. So those who don’t know a thing should shut up.

Second, everyone has the right to choose how they want to live their life. PETA people choose not to eat animals because that is their choice, probably some are allergic and stuff probably some are on a diet and God knows whatever reason an individual choose to be vegan. Don’t shove on other people’s throat your beliefs because some people prefer meat than grass.

Third, trees, vegetables, plants are living things too right? So why PETA people eat them? When they cut the leaves from the branch they are hurting the plant, poor plant, the juice coming out of it are tears. They are so cruel to kill that plant. HAH! You don’t want to be cruel to animals, why be cruel to plants, they are living things too right? So shall I call PETA hypocrits?

So if this is the situation, PETA should starve to death don’t eat anything that has life or anything that comes from something with life. Maybe they should rethink their diet and eat rocks, sands, metal and anything that is lifeless.

Everything on earth was put in here to serve a purpose. If they are so very animal righteous crazy then why don’t they go to the jungle and prosecute the lions, tigers, crocodiles etc, and any carnivorous animals hunting other animals to survive.

Before they open their mouths they should think, research and verify their facts, because they are the ones who are looking like idiots. Eating is a way to live and survive. We should respect each others way of life. This campaign instead of creating awareness is creating a scare. We already have enough scare and worries in our life to scare everyone that drinking cows milk causes autism.

Autism Society of America condemns this ad campaign of PETA.

Here's something else you can read

Getting Your Kids Immunization/Vaccines During the Pandemic?

Warning: Condoms Are Dangerous To Your Health — CBCP

To Be Or Not To Be A Melanie Marquez

Who run this blog?

With this blog I want to inspire, to teach, to learn, remember, serve and make my life count. I don't compete with others but I do compete with myself.

If you want refreshingly honest and entertaining opinon to help your brand reach your audience through this blog please send an email:

Get First Dibs on New Post by Subscribing Below

What to find at Earthlingorgeous